You are now on the site for health care professionals. Please consider that all the information about Diaton Tonometer is provided for Professionals!

Together Open New Opportunity for Medicine

It is a non-contact (no contact with cornea), pen-like, hand-held, portable tonometer. It requires no anesthesia or sterilization.

a problem of Blindness due to Glaucoma, the second most common cause of blindness Worldwide.

The more detailed information on IOP measuring methodology and the meaning of the displayed symbols you can find in the Operation Manual and in the Training Video.

Transpalpebral tonometry refers to methods of measuring intraocular pressure through the eyelid.

Assignment and usage of control buttons

OPERATION - grey round button near the display, used for turning the tonometer ON/OFF and for getting the digital IOP value after finishing the series of measurements.

Transpalpebral tonometry - methods of measuring IOP through the eyelid

Turning the tonometer ON

Press momentarily the OPERATION button once.

IOP measuring must be realized the tonometer's position being strictly vertical!

Place the tonometer's tip in the cuts of the testing device.

Fluently lower the tonometer's body down until the rod falls.

The display must show the test value from 18 to 22.

The checking is finished.

At other test values the tonometer is considered inoperative.

Stable getting of the correct test results is possible only if you have no difficulties with the control buttons and keeping the tonometer in vertical position! 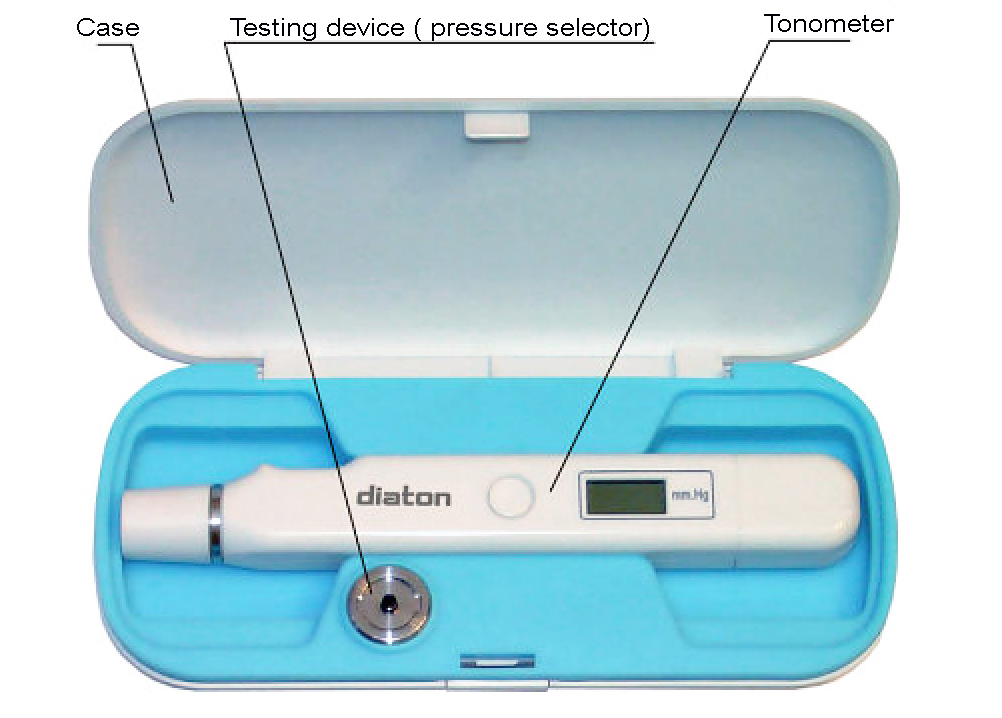 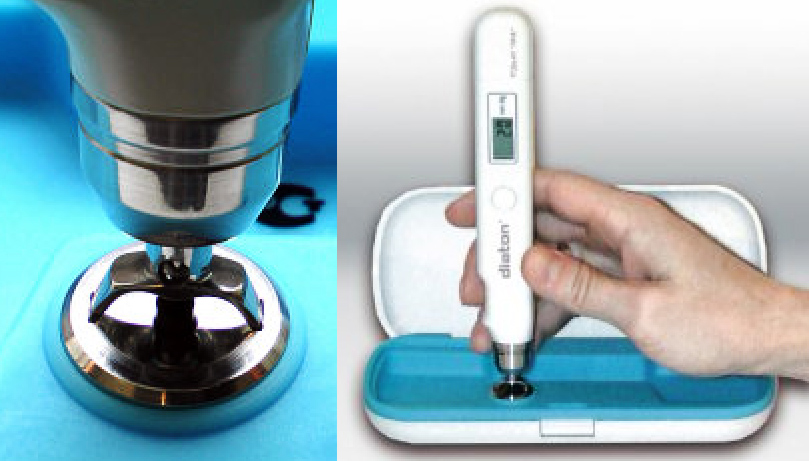 It is possible to measure IOP the patient being in sitting or reclining position. At that horizontal position of the patient's head without throwing it back is absolutely necessary.

Disinfect the tip of the tonometer according to the directions of the Operation Manual.

Stand at the side and behind the patient .

Put the rod into working position, turn the tonometer ON.

Place the hand with the tonometer on the patient's forehead. With the other hand go on keeping the eyelid in the necessary position

Place the tonometer's tip on the eyelid in such a way that the front part of the tip is as close to the front edge of the upper eyelid as possible without touching the eyelashes.

The influence zone of the tonometer's rod must be the part of sclera corresponding to сorona ciliaris in 12 o'clock meridian. Secure the tonometer's vertical position (there's no sound signal).

Fluently lower the tonometer's body keeping its vertical position until the rod falls on the eyelid which is accompanied with the short sound signal.

Eyelid removal on cornea during IOP measuring is prohibited

IOP measurement is reliable only in sclera area! 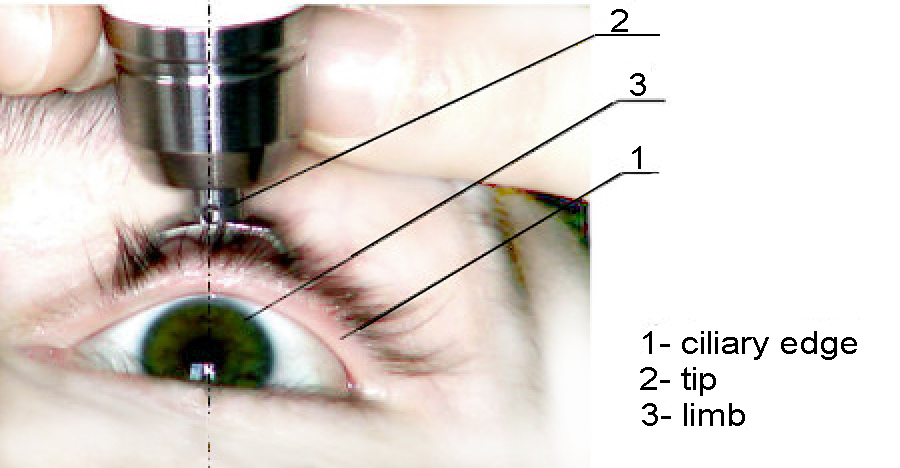 Interpretation of the received IOP values

The result is reliable

The IOP measuring of the eye being studied is finished

If necessary carry out the new series of IOP measuring strictly following the methodology.

The result is considered erroneous.

Carry out the new series of IOP measuring strictly following the methodology.

Attention! If you keep the OPERATION button pressed for mere than 3 seconds the tonometer enters the auxiliary mode the auxiliary information being displayed. It is easy to be corrected; the detailed information can be found in Part II of Operation Manual.

Carry out the IOP measurement of another eye.

The measurement is realized not on the sclera (but on the limb or on the cornea).

The situation can arise due the following reasons:

Please pay attention once again to the correct position of the eyelid and the tonometer's tip this is the most important condition of receiving the reliable results! 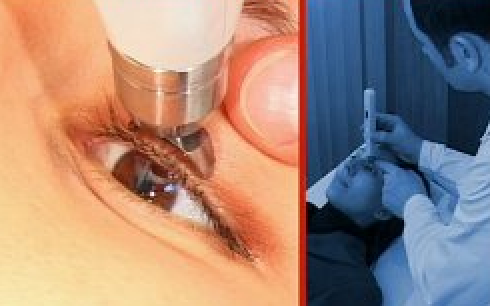 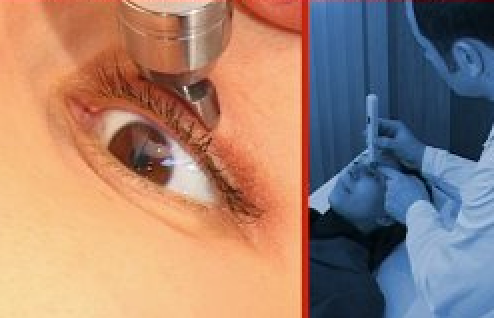 You did not coincide the patient's upper eyelid with the edge of the limb. The eyelid slightly moved to the limb even before the measurement that's why the IOP measurement was realized not in the sclera area but on the limb or on the cornea.

During the IOP measurement the tonometer's tip is placed beyond the eyelid cartilage that is not close to the ciliary edge but indented for 1 mm or more.

In this case the result underestimation is connected with the influence of the eyelid viscosity because this influence increases significantly while moving further from the ciliary edge and disfigures the tonometry results.

The tonometer's display shows the number of a single IOP measurement (, the digital result is recorded automatically in the tonometer's memory.

Keeping the eyelid in the same position immediately put the rod in the working position and proceed with the measurement series until you hear one long sound signal (or two long sound signals). Press the OPERATION button and you'll get the digital IOP value on the display.

During carrying out the measuring series do not look aside the display showings!

You will see the IOP value only after finishing the measuring series and pressing the OPERATION button.

Putting the rod into working position

The working position of the rod is its fixing inside the device (the rod is not seen in the tip area).

If the rod is seen in the tip area, it's necessary to put it into working position.

Keep the tonometer vertically with its tip downwards

Fluently turn the tonometer with its tip upwards

To get the reliable results it is important to learn how to reach the vertical position of the tonometer before starting IOP measurement in patients.

Getting skills in tonometer usage

Use the testing device to get the stable experience

in usage of the tonometer!